This edition of St Mary’s News starts with Christian Aid Coffee Morning, announces Jubilee Songs of Praise at the Old Church, updates on Church Heating and Hall and other events and the usual listings of services and contacts.

Please pop along to the Rectory on Monday 16th May, between 10 am – 12 pm, at 1 Church Close, West Bergholt for tea/coffee and cake and lots of fun and fellowship whilst raising money for Christian Aid. This is an event for all the six parishes and all are very welcome!

END_OF_DOCUMENT_TOKEN_TO_BE_REPLACED

The Environment & Highways Committee of West Bergholt Parish Council met on 14th April 2022 with topics including:

END_OF_DOCUMENT_TOKEN_TO_BE_REPLACED

The Environment & Highways Committee of West Bergholt Parish Council met on 10th February 2022 with topics including:

END_OF_DOCUMENT_TOKEN_TO_BE_REPLACED

The whole village got together on Saturday 16th June to hold a Family Fun day on the Lorkin Daniell Playing Field in the village. The organisers and volunteers turned up to set out the fayre from very early on Saturday morning and were determined to put on a show to remember despite the very windy conditions.

Our event began as planned with an assembly of our children at Heathlands School all having decorated their scooters and “jubilee rides” ready for the parade to the playing field and ultimately the judging competition. Many were clutching their favourite Teddy Bears ready in expectation of the Teddy Bears picnic they would all enjoy following the scooter competition.

The parade was led by Terry Doonan a long time resident of West Bergholt with his highly decorated mobility scooter who at times struggled to keep his powerful “ride” ahead of the excited children’s parade. As the parade entered the specially prepared field and arena they were greeted by the sound of Chariots of Fire and the applause of proud parents and spectators alike.

The winners of the decorated “ride” competitions were presented with their prizes by Neil Mathews, Head Teacher of Heathlands and the winners were;

Over 250 children sat down to the Teddy Bears picnic where each child was presented with a Diamond Jubilee celebratory box of goodies including hat, flag, cake and drink all lovingly prepared by the Blue Bell team and village volunteers.

At the end of the picnic we were all treated to the sight and sound of an impressive fly past by the Royal Air Force who obviously hearing of our family event appeared to divert from their usual flight path to attend our fayre on the way to greeting Her Majesty on her official birthday.

We were all then treated to series of displays by the West Bergholt Dance Troupe, Zumba Class and Heathlands Choir where all were encouraged to take part at the appropriate time. To add further excitement we held our traditional family games competition including a Tug o War, Sack Race and Egg and Spoon Race with prizes for the winners in all categories.

During the afternoon the Woman’s Institute announced the winners of the Diamond Jubilee Card Competition where children were asked to design the front and inside of the card and a verse composed by an adult was selected to complete the greeting card which is to be sent to the Queen on behalf of the village to mark her Diamond Jubilee year. The winners were;

The awards were announced by Susan Leng WI President and presented to the winners by John Gili-Ross Chairman of the Parish Council. 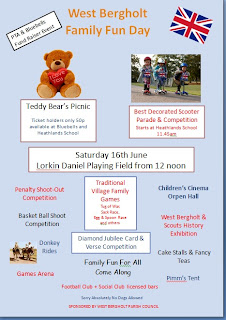 Come & join us for all the fun of a traditional country fayre starting at the Lorkin Daniel Playing Field at 12 noon.  Join in with activities, games, competitions, rides such as:

This event has now happened – read here for report.

The culmination of a long weekend celebrating Her Majesty’s 60th Anniversary saw West Bergholt become centre stage as it took its place in the global ‘beacon relay’, an event which started many hours earlier on the far side of the world and culminated just 15-minutes after West Bergholt’s Beacon was lit with Her Majesty’s Beacon at 10:30pm on Monday 4th June.

Our open air event took place on Lorkin Daniell Playing field in the heart of the village. The culmination of the celebration was the lighting of its Jubilee Beacon, designed and manufactured by Adrian Leach a village resident. The Beacon was lit by two of our village youths, Amber Harlow and Sam Ryan, who were closely monitored by Cllr John Jowers of Essex County Council (ECC). The theme of the evening was a night of music presented by West Bergholt Concert Band conducted by Graham Wilson.

More than 500 people attended the village celebrations which began with the formal opening of a youth shelter on the playing field which was designed and constructed by another village resident Ian Dickson.  Construction of the shelter was made possible by grants from the Parish Council and ECC and uses a design agreed with the youth of the village.

Clicking on the picture will take you to a slide-show of pictures taken by one of our much applauded volunteers for a great event well run and which bought smiles to so many villagers – the slide-show does run in reverse order ☺.

This material has been developed for the West Bergholt Village Website at http://www.westbergholt.net
Social Media Auto Publish Powered By : XYZScripts.com
Accessibility by WAH